Amsterdam or Rome; a city comparison and tourism travel guide

Both Amsterdam and Rome are fantastic cities, but which is better for your city-break or holiday?

Introduction to Rome and Amsterdam

No city can rival Rome’s historic and religious importance. The city is a living museum, with iconic landmarks and historic-monuments intern-connected by grand avenues and charming side streets. Rome may be historical, but is far from a stagnant relic, it is a vivacious and chaotic city, led primarily by emotions and the heart.

Rome has its flaws, brought on from years of austerity and political mismanagement, but if you are able to gloss over these failings and focus on the culture, cuisine and iconic monuments, you will adore your time in Rome. 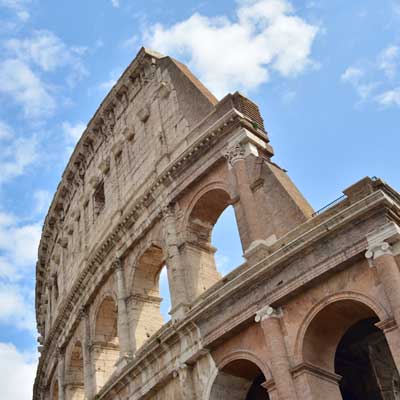 The Colosseum is the icon of Rome, and possibly Italy

Modern Amsterdam is a great place to visit. Europe’s most liberal city is attempting to mature and rebrand itself as a cultural and stylish destination.
There will be always visitors who come for the quirky and liberal aspect of the city, from the coffee shops, which sell no coffee and the red lit streets, but there is so much more than Amsterdam’s stereotypes.
Found in the city are world class museums, social nightlife and welcoming attitude rarely experienced elsewhere.

Singel canal in Amsterdam with typical Dutch houses and houseboats. 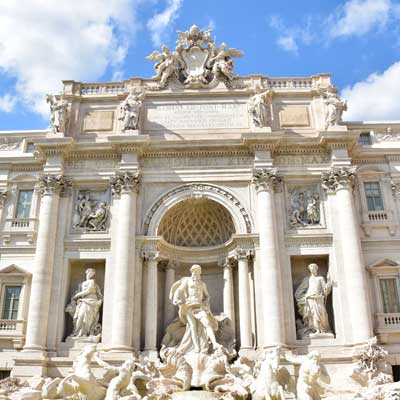 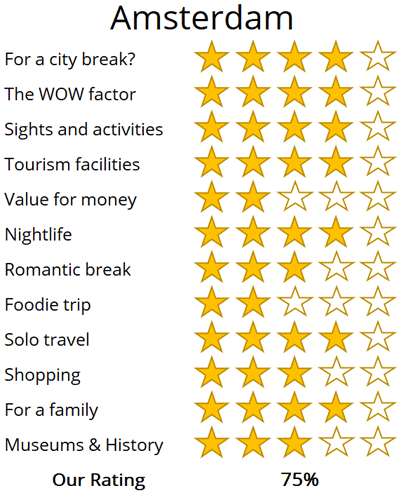 Summary
Which city would I go to? Rome (really tough decision)
Which one would I recommend to my parents? Amsterdam
Which location for my 19-year-old cousin? Rome
Which for my food obsessed friend? Amsterdam
Note: The above comparison does not consider the weather, and assumes travel at the best time of year (which is detailed later in this article)

Considering the sheer number of outstanding tourist attractions, Rome can be seen within two days. Three days allows for a more enjoyable visit to Rome, with time to absorb the culture. There can be long queues for the Sistine Chapel and the Colosseum, so starting early in the day is essential for a two-day visit.

There are good day trips from Rome including the Roman ruins of Ostia Antica or the historic town Tivoli. Rome has excellent intercity trains, and it is possible to visit Florence or Naples, or even Pompeii (2 hours by train) as day trips.

3 days is ideal to get a good flavour of Amsterdam, and in this time you could include a quick day trip out of town. Much less and it might feel a bit rushed, especially if you are visiting for the first time.

If you can afford more time, there are a surprising amount of places worth visiting in the surrounding area. Many people like to visit Keukenhof in spring, the largest flower garden in the world. There are also the Zaanse Schans Windmills and fairy-tale castle ‘Kasteel De Haar’ not too far away.
Lots of people also like to visit one of the numerous planned cities built on land reclaimed from the sea such as Almere or Lelystad, a short 20-minute train ride from the central train station. Because these cities are so new, they have prided themselves on drawing on the latest innovations in architectural design.

Stroopwafel is a delicious Dutch snack 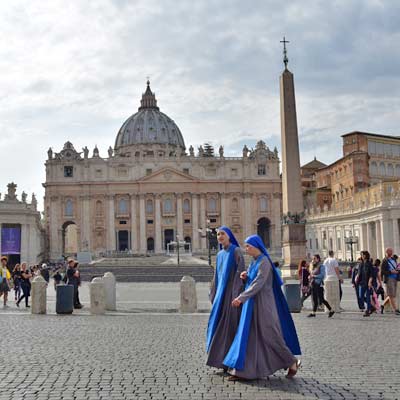 Most visitors head to Rome in the hot, humid and crowded summer months of July and August. Early spring or autumn are a much better time of year, and provides a much more agreeable climate, without the throngs of tourists. To truly avoid the crowds, consider November to March, but there is always the slight chance of rain and it can be chilly. Even if it does rain, head indoors for a long lunch.

Spring is the best time of year to visit Amsterdam before the summertime high tourist season hits, and you can catch either the King’s Day festival in April or awe at the sea of tulips at Keukenhof.

The warmest month in Amsterdam is August with average temperatures of around 22 degrees (71F) which isn’t that hot! It gets pretty chilly in winter, down to just above freezing. The weather is generally very changeable all year round so we recommend you be prepared for all weathers at all times! It could easily rain or be windy for at least one of the days you are there.

There’s something for everyone in Amsterdam.
While it has historically attracted hipsters, it also has a lot to offer to those looking for a peaceful and relaxed place to getaway. It’s easy to follow one of the canals out from Rembrandtplein in the centre to a quieter neighbourhood such as Jordaan or Prinsengracht either on foot or by bike, or even better, floating along by canal boat.

Believe it or not, Amsterdam is also an incredibly family-friendly city. The relaxed approach to parenting permeates its museums, sights and events and the city is home to hundreds of playgrounds and child-friendly cafes.

Rome’s appeal is ageless and timeless. It is no matter if you are going there for the perfect Instagram post of the Colosseum or on a religious pilgrim to the Vatican, the city will not disappoint.
Sadly, the years of austerity and political mismanagement are starting to wear through Rome, with an unkept and unloved mentality decaying around the edges of the city. 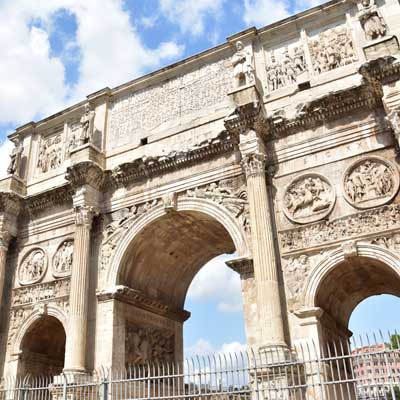 Street cafe on a canal in Amsterdam

Rome in 48 hours
Below is an interactive map for 48 hours in Rome; day 1 is highlighted in green and day 2 in yellow, with optional sights in grey.

Begin at the icon of Rome, the Colosseum, but also explore the Foro Romano with its many excellent Roman ruins. On the way to the historic centre of Rome passes the Vittorio Emanuele II Monument, with its amazing viewpoint. For the afternoon explore the charismatic centre of Rome, taking in the Piazza Navona, the Fontana di Trevi and Piazza Colonna and the Pantheon. For the evening head to the Trastevere district on the western banks of the Tiber, for bars, late food and lively experience.

Start early on the second day to avoid the queues for the Sistine Chapel and Saint Paul’s Basilica. From the Vatican City, follow the River Tiber past the Castel Sant'Angelo, Mausoleo di Augusto to the Piazza del Popolo. For the afternoon explore the Villa Borghese park, before heading down the Via del Babuino, past the Spanish steps and into the Trevi district for a delicious meal. Before finishing in Rome part take in the tradition of passeggiata, an evening stroll wearing your finest clothes.

Start on day 1 in the Museum Quarter where some of Amsterdam’s world-class museums are. Rijksmuseum where Rembrandt’s ‘The Night Watch’ is held can be found here, as well as the Van-Gogh Museum and Stedelijk Museum, which contains a huge collection of everything from sculpture to painting to photography by artists such as Picasso and Warhol.

In the afternoon, head to the artisan area of Jordaan. It has a homely charm to it with all the houseboats along the quays and old crooked buildings.
If you’re looking for a night out, head to the areas of Leidseplein or Rembrandtplein in the evening. 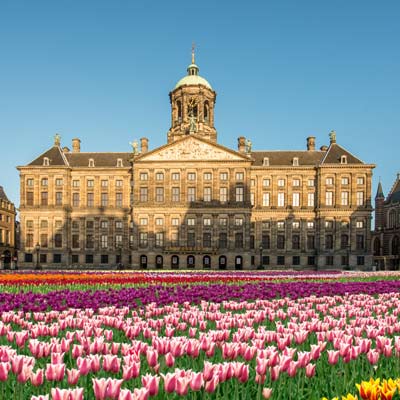 On day 2 head to Dam Square and the Royal Palace then the red-light district.
A visit to the Anne Frank House is a fascinating and sobering experience but this can get very busy so we recommend booking ahead online for a specific time.
If you are looking for something a bit slower paced in the evening - a great photo opportunity is from the Magere Brug. After dark, this bridge is illuminated by over a thousand lights and due to its location, it makes for a good vantage point where you can see 15 bridges at the same time.

Boat cruise along a canal in Amsterdam

On arrival in Amsterdam Schiphol airport, the quickest way to get into town by public transport is the train which costs €5.40 and takes 20 minutes. The bus costs €5 and takes about 35 minutes.

Amsterdam is an expensive city. Walking and cycling are the best ways to get around. By boat you can see all the big sights too and there are many options for hop-on-hop-off. There is also an impressive public transport system of trams, buses, metros, trains and ferries to help you get around. 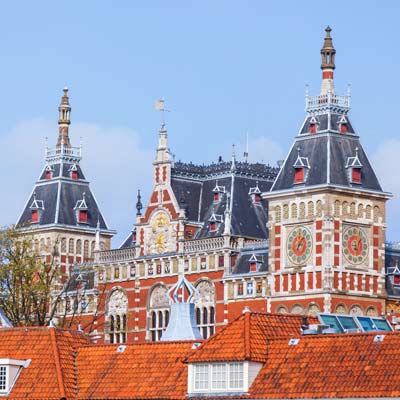 All cities have their perils but with regards to Amsterdam, probably the main ones to consider are bike safety and caution in the "coffee shops". As well as the usual bike safety rules you’d expect at home, keep an eye out for nippy scooters on the bike lanes and avoid rush hour if possible. In terms of the coffeeshop visits – don’t underestimate the effects of the products, as the varieties sold here are more potent than elsewhere.

Amsterdam is typically an extremely safe city for solo female travellers but it’s not advised to visit the Red Light District at night as the area does have a seedier vibe.

Rome has to be visited at least once in your life and a city break is the ideal opportunity. Rome is served by two airports; Leonardo da Vinci (regular airlines) and Ciampino (low-cost airline), and there are regular train services from both to central Rome. There is plenty of flight capacity and reasonable prices can be found year-round.

Roman has numerous hotels, and accommodation options, but the common complaint is the relaxed approach to maintenance and upkeep. Rome is a destination to check all hotel/room reviews before booking.

For your first visit, you would want to be based in the tourist square, with Villa Borghese park in the north, Termini train station to the east, the Colosseum to the south and Vatican City to the west. Rome is an enjoyable and easy city to explore, and all of the main attractions are in this tourist square.