Copenhagen or Porto; a city comparison and tourism travel guide

Both Copenhagen and Porto are fantastic cities, but which is better for your city-break or holiday?

Introduction to Porto and Copenhagen 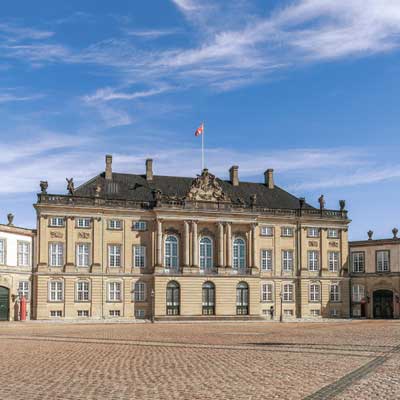 Amalienborg Palace (Copenhagen) is the residence of the Danish royal family

Porto is the surprise of western Europe. This hardworking and unassuming city seems to have stumbled into tourism without even realising its own potential. The variety of historic sights, personable atmosphere, along with a glass of sweet Port wine, creates a wonderful tourist destination.

Porto may be comparatively small and virtually unknown, but it can rival any of the more established tourist destinations. The unique appeal of Porto is that it is not swamped by tourists in the summer season, and is ideal for a summertime city break. 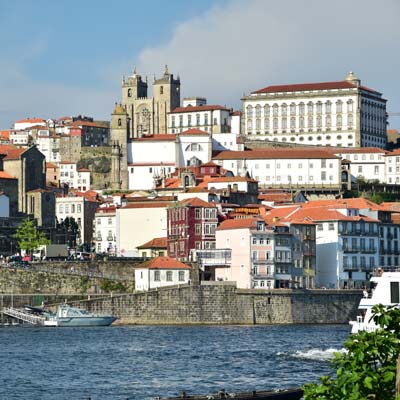 The Ribeira is the oldest district in Porto 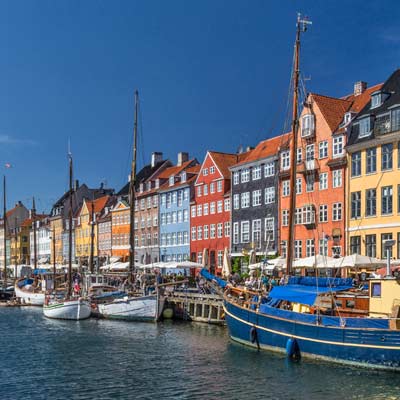 Summary
Which city would I go to? Copenhagen
Which one would I recommend to my parents? Copenhagen
Which location for my 19-year-old cousin? Porto (Copenhagen is too expensive for him!)
Which for my food obsessed friend? Copenhagen
Note: The above comparison does not consider the weather, and assumes travel at the best time of year (which is detailed later in this article)

Porto is a compact city, and if rushed, all of the major tourist areas can be seen in a single day. Typically, we would recommend two days, which would include a short cruise along the Douro River and time for port tasting.

If you wished to extend your trip further, there are some great days out to the historic towns of Guimarães, Braga and Aveiro. During the summer (Jun-Sep) there are beautiful beaches along the Costa Verde coastline, and you could visit the resort towns of Espinho, Vila do Conde or Matosinhos.
Related articles: 2 days in Porto – 1 week in Porto 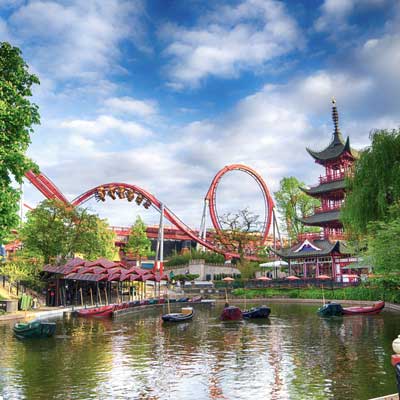 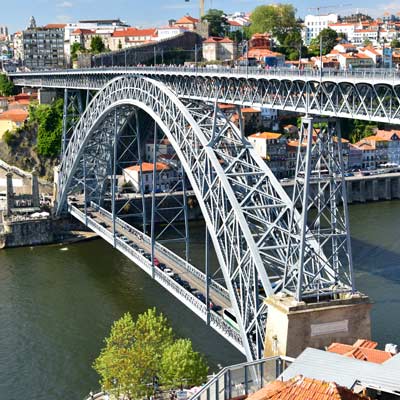 The Ponte Luís I bridge in Porto spans the Douro River

Porto is one of the best European cities for a summer city break. While the rest of southern Europe swelters under the unbearable summer heat, Porto experiences pleasant weather and is not completely overrun by tourists.

Winters are mild and wet, and there is a high chance of rain from October through to May. The middle of June is the best time to visit the city when the Santos Populares festivals are being held.

The characteristics of Porto traditionally appealed to the older visitor; it is very safe and there is a pleasant unhurried ambience, with a slightly conservative attitude. This mature opinion of Porto is often compounded by the most popular activities; Douro River cruises and Port tasting (which is great fun!).

This demographic of visitors to Porto is rapidly evolving, as younger travellers realise it is actually a progressive city, with a lot to see and do. Porto will appeal to those looking for somewhere slightly different, but who want a hassle-free trip with decent tourist facilities. Being one of the safest cities in Europe makes it ideal for solo/female travellers. 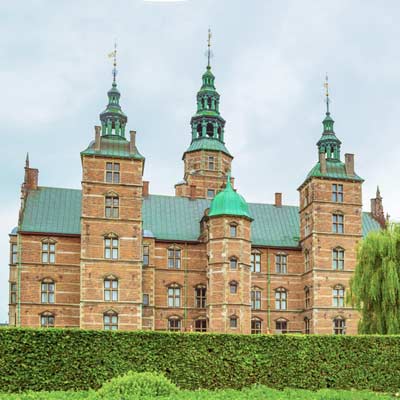 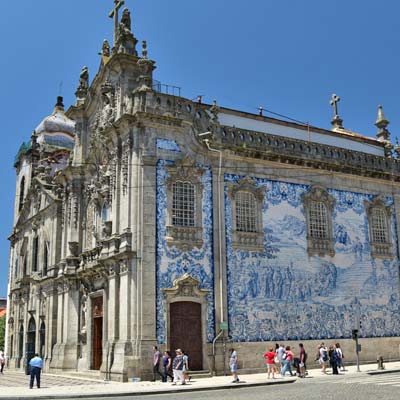 The beautiful Azulejo tile painting on the side of the Igreja do Carmo, Porto

Porto
Considering the size of Porto there is a lot to see, and you can pack in a lot in a 48 hour visit.
Below is an interactive map of where we recommend to go in 48 hours in Porto; day 1 is highlighted in green and day 2 in yellow, with optional sights marked in grey.

A tour of Porto typically starts in the Se district, with the gothic cathedral and ancient city walls. Next is the Baixa district, where you can find the Avenida dos Aliados, and enjoy the view from the top of the Clérigos Tower.

For the latter part of the day and evening visit the ancient Ribeira district, which lines the banks of the Douro River. For the evening, join one of the boat cruises along the river or to party head to the Vitória district. 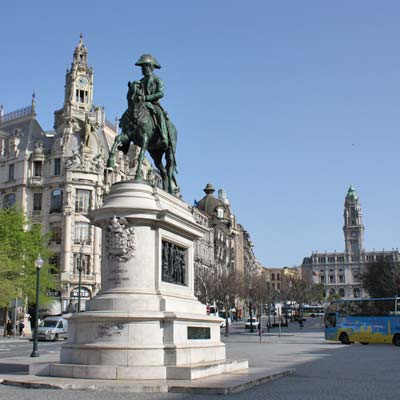 The Avenida dos Aliados is the grand plaza of central Porto

On the morning of the second day, ride the traditional tram to the Foz district, which is positioned at the mouth of the Douro River and extends along a rocky coastline to the beach of Matosinhos.

In the afternoon, and the highlight of Porto, are the tours of the Port cellars and Port tasting. Lining the southern banks of the Douro River are eight of the major Port producers, each with their vast cellars and tasting tours. You’ll happily leave Porto a Port connoisseur and a little tipsy… 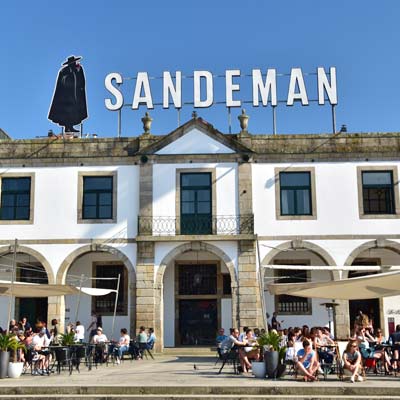 The Avenida dos Aliados is the grand plaza of central Porto 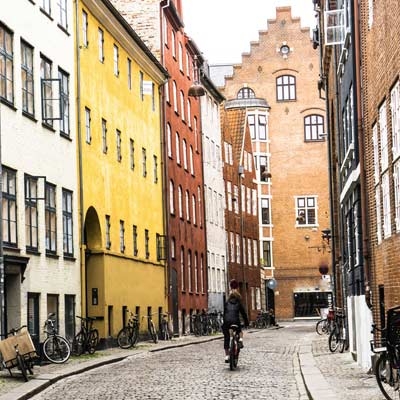 In the afternoon head into the historic Frederiksstaden district, with the Amalienborg Palace, and the Frederiks Kirke church both beautiful examples of grand Rococo style.For a cultural end to the day visit the SMK museum (the Danish National Gallery) or the Nationalmuseet Museum. 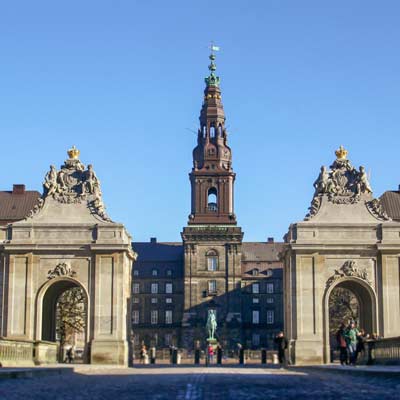 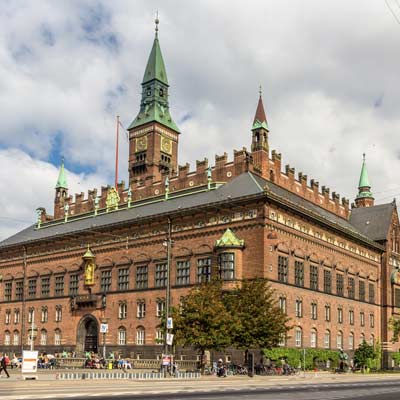 Porto is a recommended destination for an alternative city break. Porto has a single airport which is 12km north of the historic centre and is connected by the metro. Porto has fewer flight routes and departures than other major cities, which means demand for weekend flights can be high. Equally, during the low season, there are bargain flights to be found.

Accommodation tends to be good value with ample supply, and most tourists are based in the Vitória, Sé or Baixa districts (all on the north side of the river). Porto can be easily explored on foot and rarely any public transport or taxis are needed for the entire trip. Just beware, there are steep hills! 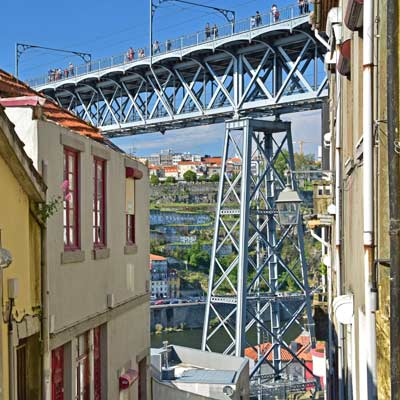 The pretty historic centre of Porto