The Best Guide to Phnom Penh

On the roads of Cambodia it is not unusual to see an entire family out on a single small 250cc motor bike, father mother three kids and the pet dog. The youngest child usually appears to be given the worst seat, often sat on the fuel tank in front of the main driver. It is a true skill of the Cambodian people to weave the over loaded bikes through the manic traffic with minimal worries to their own safety.

How many people can a bike pull? Only in Cambodia

Tourist are given the chance to travel in luxury in the form of carriages which are attached to an over worked 125cc bike. These modern day horse draw carriages were popular around Siem Reap and the temples of Angkor Wat but now are found within Phnom Penh. These carefully maintained carriages bump and jolt over the roads with the small bike engine whining struggling to pull a load way beyond the normal capacity. The carriages can transport up to 6 passengers and even include some space for luggage. 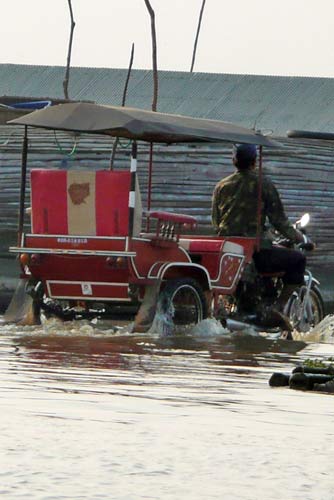 Is that sensible driving a bike through a river?

The big daddy of the bike carriage is common on tourist collection routes ferrying groups from hotels to transport hubs. These larger versions involve a wagon, more designed for a farmer’s field, pulled by a much more powerful bike. These trailers as always are loaded to the extreme with more than 12 passengers and backpack luggage. Tuk-Tuks in Cambodia are much more varied than the single type found in Thailand, they range from three wheeled scooters through to improvised side cars. The term Tuk-Tuk in Cambodia more applies to a generalisation of taxi transport than to the tradition three wheeled bikes. 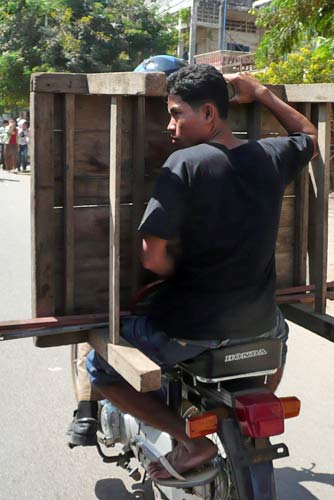 Is that safe, I think not.

The roads in Cambodia especially the capital are very busy with bikes travelling in every direction but serious injuries are surprisingly few mainly thanks to the very limited speeds of most of the Tuk-Tuks and bikes. While walking along the streets of Phnom Penh expect to be shouted, tooted, and buzzed by Tuk-Tuk drivers trying to tout for business, always agree a price before setting off in a Tuk-Tuk.

2WeekBackPack.com, with over 250 pages of travel ideas, if it's not here it's probably not in Phnom Penh

The best Guide to Phnom Penh

Over 150 pages of travel guides and inspirations