The Best Guide to McLeod Ganj

When to Visit McLeod Ganj and Dharamsala

The best time of year to visit McLeod Ganj and Dharamsala is during the early spring months or late autumn. The worst season to visit is during the monsoon season as a massive amount of rain falls over the region. 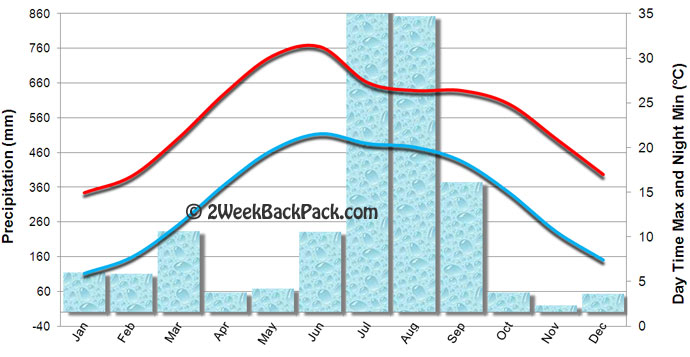 The region is particularly pretty during the snow falls of winter but transportation becomes difficult and dangerous. The Tibetan New Year, Losar, is the largest festival in the Tibetan calendar and occurs between February and March.

As McLeod Ganj lies high within the Himalayan foothills the weather can be unpredictable and can change rapidly, this is most noticeable during the winter months. The only season when the weather is completely predictable is in the hot summer months of April through to June. The temperature of McLeod Ganj's summers can top 35°C and Dharamsala 38°C but the mountain air is significantly cooler and less humid than the plains of central India. If you have to visit India during the summer months the Himalayan foothills are a good choice of destination.

McLeod Ganj is best avoided during the monsoon season as the rains are heavy and prolonged. The main monsoon months are July and August but the rains have been known to fall early in June or extend out into September. The vast quantities of rain that fall during the monsoon season cause landslides and other damage to the roads connecting Dharamsala and McLeodganj and it can be weeks before they are fully repaired.

October and November are good months to visit McLeod Ganj and Dharamsala; the days are generally bright and sunny with cool nights. In the autumn months clouds and mists can quickly descend making temperatures plummet and this routinely catches out unsuspecting tourists trekking through the hills. If hiking during these months always take a warm and waterproof jacket.

The Bhagsu Waterfall is a popular hiking route from McLeod Ganj

During the winter months of December and January snow falls and settles within both towns. Though extremely pretty the snow and ice can make travel difficult and dangerous. Also check that your hotel has not skimped on heating has nights can be bitterly cold. If visiting during any of the winter months take warm clothes. The spring months are the most pleasant of McLeodGanj and Dharamsala as the colour returns to the mountains and the days are crisp and bright.

This is the ideal season for hiking and trekking through the Himalayan foothills before the heat of April and onwards. This is regarded as the high season for the tourist trade so to guarantee either good value or standard accommodation book slightly ahead.

2WeekBackPack.com, with over 250 pages of travel ideas, if it's not here it's probably not in McLeod Ganj

Over 150 pages of travel guides and inspirations